Subspecies:  Six subspecies are currently recognized, but only one, Eastern Coachwhip, C. f. flagellum is known from Illinois.

Description: Long (up to 260 cm TL), slender, black snake. Adult uniformly black above and below, fading toward the reddish or tan tail. Juvenile yellow to brown on the back, with dark crossbands; belly cream with rows of brown spots and head marked with white.

Natural History: Fast-moving diurnal snake that is difficult to capture, but tales of it wrapping around people’s legs and whipping them with its tail are fictitious. If it cannot escape, it strikes and bites, often aiming for the face, and sprays feces and musk. Withstands dry habitats because it is quite resistant to desiccation. Mates in spring soon after emergence from hibernation and lays 4–24 eggs in summer. Young (ca. 30–35 cm TL) hatch in September. Varied diet includes insects, lizards, other snakes, birds, small turtles, and small mammals. It tracks prey by scent, following them into burrows or trees. Raptors, mammals, and other snakes are its main predators. 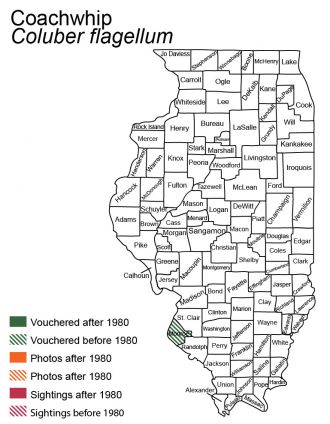 Distribution Notes: There are only four specimens known from Illinois; all collected in Monroe County from 1949-1974. Repeated attempts to find this species in this area have failed.

Nomenclatural History: Because this species was only discovered in Illinois in 1949 (Smith & Burger. 1950. Chicago Acad. Sci. Nat. Hist. Misc. 56:3 p.), its nomenclature in the Illinois literature has been stable. There are conflicting molecular data concerning whether Masticophis is paraphyletic with respect to Coluber and the synonymy of the former with the latter.