Description: Small (up to 45 cm TL) gray or light brown snake with two rows of small, dark spots on the back. On some individuals back spots are connected by side bars to form a ladderlike pattern. Usually a faint light stripe on midback. Belly light pink. Juveniles have a gray or white collar behind the head. 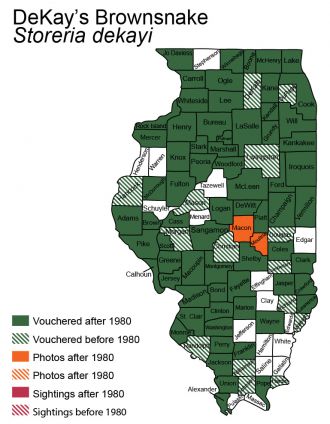 Habitat: Variety of forest and prairie habitats, floodplains and uplands, forest edges, even cultivated fields, and especially in vacant lots in cities.

Natural History: Abundant where there is much surface cover and an abundant supply of food. Mates in April and May and gives birth to 5-25 young from late July through early September. Newborn 5-12 cm TL. Eats mainly earthworms and slugs, and is preyed upon by snakes, birds, mammals, and even large toads and spiders. Large numbers are killed on roads separating cultivated fields from forested rocky bluffs each spring and autumn as they move to and from hibernacula.

Status: Common throughout most of the state.