Natural History: One of the few amphibians that feeds regularly on ants. Fold of skin on head is used to push ants away from eyes. Outside of breeding season it is found in rotten stumps and beneath rocks, logs, bark, and other objects on ground. Weak jumper, moves by short, rapid hops. Breeds in summer. Male usually calls from edge of water, concealed under plant debris. Call is a high-pitched buzz or “baaa” reminiscent of distressed lamb. When male amplexus female, sticky substance secreted from glands on his belly glues him temporarily to her back. Female lays over 800 tiny eggs in one layer at water surface. Embryos hatch in a few days and tadpoles transform in 20-70 days. 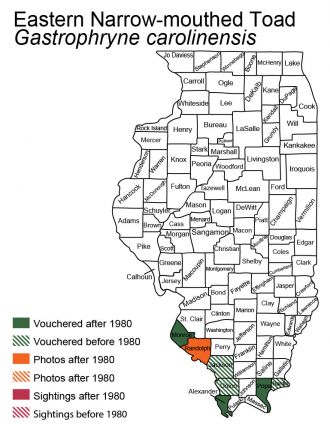 Distribution Notes: Known from only six southern counties. May eventually be found in Pulaski and Massac counties.

Status: Because of the secretive nature of this frog, it’s dsitribution in Illinois remains unknown. Threatened.

Type Locality: Not designated but given as “never been found north of Charleston [South Carolina]; its exact range extending westward to the Lower Mississippi. . . ”

Nomenclatural History: Temporarily transferred to Microhyla, and referred to as Microhyla carolinensis in older Illinois literature.