Similar Species: Recently transformed mole salamanders (genus Ambystoma) may be confused with the Eastern Newt, but the latter does not have costal grooves. See Key to Illinois Salamanders for help with identification.

Habitat: Permanent and semi-permanent ponds and sloughs in or near forests.

Natural History: This salamander has an unusual three-part life history. Adults and larvae are aquatic, but there is an intermediate terrestrial stage called the eft. During spring, adult females attach tiny, pale eggs individually to underwater plants. Best breeding ponds are fish-free, but extensively vegetated borders of stocked lakes are satisfactory. Aquatic larvae transform mid- to late summer into efts, which, after living on land for 1-3 years around bark, logs, rocks, and damp leaves, mature and return to breeding pond. Efts often walk about during the day after rain. In some permanent fish-free ponds, larvae develop into gilled, otherwise-transformed adults. Outside the breeding season, adults may remain in pond or wander on land nearby. 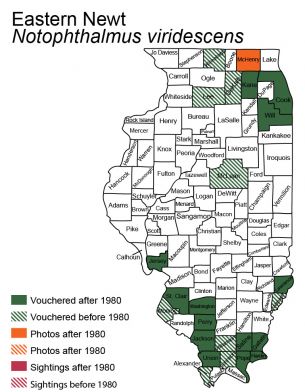 Distribution Notes: Smith (1961) believed that the species “once occurred throughout the state except in the extreme western part”. This was based on his acceptance of three records from central Illinois, all collected by H. Garman.  Only the record for McLean County is documented by a specimen; MCZ 2055 and it has not been examined.  The remaining two (Peoria Co. & Tazewell Co.) are listed in Garman’s (1892. A synopsis of the reptiles and amphibians of Illinois. Illinois Laboratory of Natural History Bulletin 3(13):215-388).  Given Garman’s other questionable records for Illinois, I reject these records and the notion that the Eastern Newt was once found in the Grand Prairie region of Illinois.  Rather, it is more likely that the species’ range was bisected by the Prairie Peninsula similar to the range of the Spotted Salamander.

Status: Common in some southern counties where swamps and breeding ponds persist and wooded habitat for efts remains. Reduced in northern Illinois by deforestation and drainage of ponds and marshes.

Type Locality: “in Lake George, Lake Champlain, the springs and brooks of the neighborhood”