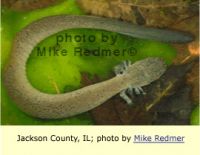 Description: Named for mythological sea nymphs, sirens are long (up to 46 cm TL), slender brownish black or dark olive salamanders with small black spots and light spots. Belly lighter than back. Elongated body bears 34-37 costal grooves. Toothless jaws covered with dark, keratinized sheaths. Males and females indistinguishable externally. Larva differs from older individual by having more extensive tail fin and distinctive orange-red markings that include head stripe from gill to gill by way of snout, band across back of head, and stripe down middle of back.

Natural History: This permanently aquatic salamander burrows by day in debris and muck, but may remain active most of year. In seasonally dry bodies of water, they descend into burrows, produce a cocoon from skin gland secretions, and estivate until water returns. Adults eat worms, snails, and crayfish. Little is known about courtship and mating. Small larvae (about 24 mm TL) appear in May, grow quickly, and within a year some are 20 cm TL. Maturation probably requires 3-4 years. Underwater microphones have detected clicking sounds produced by sirens when they approach each other. 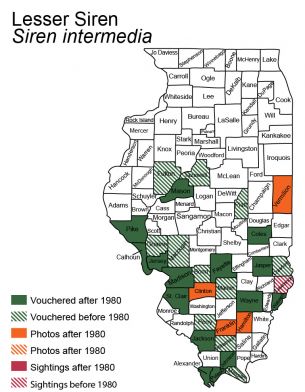 Status: May be even more widespread than thought, but infrequently seen because of secretive habits. Common in the southern quarter of the state and in places along the Illinois and Wabash rivers.

Original Description: Barnes, D. H. 1826. An arrangement of the genera of batracian [sic] animals, with a description of the more remarkable species; including a monograph of the doubtful reptils [sic]. American Journal of Science and Arts 11: 268-297.

Type Specimen: “in the Cabinet of the Lyceum”; not known to exist.