Description: A small (up to 13 cm TL), slender copper to chocolate brown lizard with a darker brown dorsolateral stripe on each side. Belly white. 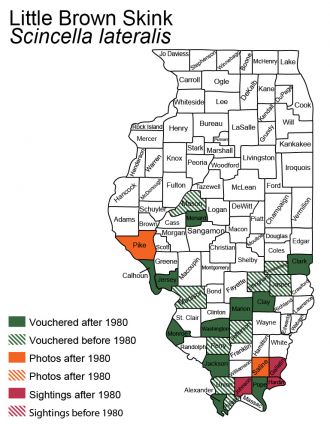 Etymology: Scincella – scincus (Greek) meaning ‘a kind of lizard’; lateralis – (Latin) for ‘of the side’

Original Description: Say, T. 1823. in Edwin James, Account of an expedition from Pittsburgh to the Rocky Mountains, performed in the years 1819 and ‘20 under the command of major Stephen H. Long, H.C. Peary, and I. Lea.  Carey and Lea, Philadelphia. 2. 442 pp.

Type Locality:“banks of the Mississippi River below Cape Girardeau, Missouri”

Nomenclatural History: Scincus unicolor Harlan, 1825 is a junior synonym.  This name was also resurrected by Stejneger (Copeia 1934 (4):182) as a replacement name for Scincus lateralis based on his interpretation that Scincus lateralis was occupied by Thunberg’s Lacerta lateralis which was later moved to the genus Scincus by Daudin. Harper (Copeia 1942 (3):180) demonstrated that “the previous use of a specific or subspecific name in combination with the same generic name has relation only to the original designation of a species or subspecies described as new, not to combinations of names resulting from the reference of species or subspecies to some other genus than the one to which it was originally referred”.  The species was transferred to several genera (Tiliqua, Lygosoma, Mocoa, Oligosoma, Leiolopisma before Mittleman (1950. Herpetologica 6(2):17-20) placed in it Scincella.