Subspecies: Formerly three subspecies were recognized, but these have been elevated to species status. See Nomenclatural History below.

Description: Medium-sized (up to 60 cm TL), stout snake with gray or tan back covered with 35-40 dark blotches. Belly mostly black. Numerous small, unpaired scales on top of the snout (in front of the eyes).

Natural History: Most often observed crossing sandy roads in brushy or weedy sand prairie remnants. Widens the neck, hisses, and sometimes strikes when disturbed, then rolls onto its back and feigns death. Mates in spring and lays eggs in July. The 8-10 young per clutch hatch in August or September at TL of 17-20 cm. Moves slowly as it searches during the day for toads, other amphibians, reptiles and their eggs, birds, and small mammals, some of which it digs out of sand with its snout. Saliva is toxic to prey, and is injected with enlarged posterior teeth. Main predators are raptors and medium-sized mammals. 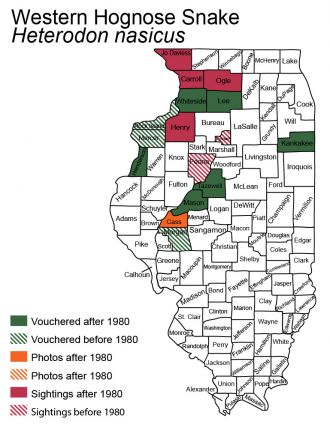 Distribution Notes: The Kankakee County population was introduced. Not reflected on the map is a specimen from Monroe County, collected by Robert Schroeder in 1957. Ed Moll (1962. Recent herpetological records from Illinois. Herpetologica 18(3):207-209) considered this specimen to be a Dusty Hog-nosed Snake, which was considered a subspecies, H. n. gloydi, Edgren, 1952 at the time.  Later Morris & Smith (1981. Endangered and threatened amphibians and reptiles. Illinois Department of Conservation, Springfield) considered it unlikely to be a valid location.

Status: Threatened in Illinois. Its main threat is degradation and destruction of sand prairies.

Original Description: Baird  S.F. & C. Girard, 1852. in Stansbury, H. Exploration and survey of the Valley of the Great Salt Lake of Utah, including a reconnaissance of a new route through the Rocky Mountains. Lippencott, Grambo, & Co., Philadelphia. 487 pp.