Similar Species: This is the only leopard frog in Illinois with broken and displaced dorsolateral folds, but the degree of breakage and displacement varies among individuals.  In addition, hybrids exist, especially between L. blairi and L. sphenocephalus, the Southern Leopard Frog. See Key to Illinois Frogs & Toads for help with identification.

Description: Medium-sized (5-9.5 cm TL) gray or brown leopard frog with rounded dark brown spots on back. Distinct light line extends along upper jaw from near snout tip to tympanum or slightly beyond. Light spot usually on tympanum, and dark spot on snout. Pale borders around back spots very narrow or absent. Belly white with greenish yellow near groin and underside of thigh. Chest and throat sometimes mottled.

Habitat: Uncultivated former prairies, marshlands, along creeks, in open bottomlands, and in old fields (former prairie) not far from water. Breeds in still waters of pools, roadside and drainage ditches, marshes, and ponds.

Natural History: In many places, occurs with the more abundant southern leopard frog, with which it occasionally hybridizes. In some places in northern parts of its range it occurs with northern leopard frog. Eats a variety of invertebrates. Adults breed during March-April, sometimes in large numbers. Breeding call is described as guttural “chuck-chuck-chuck.” Female lays 3,000-7,000 eggs. Tadpoles transform in midsummer. 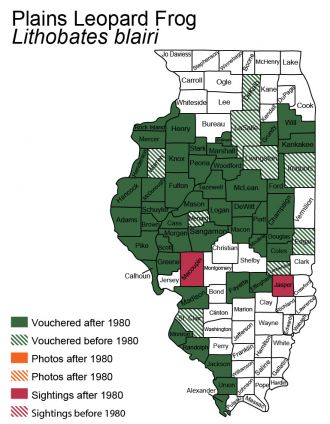 Distribution Notes: Formerly widespread in extensive prairie marshlands of the Grand Prairie division. Remains widespread, but not abundant, in peripheral prairie remnants.  Also found in a few counties south of the Shelbyville Moraine, but largely absent from the outlier prairies of the Southern Tillplain.  Also found all along the Mississippi Border division.  See Brown and Morris (1990. Distribution, habitat, and zoogeography of the plains leopard frog (Rana blairi) in Illinois. Illinois Natural History Survey Biological Notes 136:6p.) for a discussion of zoogeography.  All counties shaded in the map are based on specimens either examined by Brown & Morris or me.  Three records from Brown & Morris are not plotted here: I have been unable to locate the Cook County record, I can find only a single Wabash County specimen (INHS 4732) that has broken, but not displaced, dorsolateral folds, and the Clark County specimen is also atypical. The latter two may be hybrids of L. blairi and L. sphenocephala, the Southern Leopard Frog. Vermilion County was mistakenly left unshaded.  The presence of L. blairi in that county is well established.

Status: Most of original habitat has been rendered unsuitable by agriculture.  Brown and Morris (1990) reported “We did not find the species to be abundant at any locality in the state.”

Nomenclatural History: Until 1973, at least, R. blairi was not distinguished from R. pipiens, so many references to R. pipiens may, in fact, refer to R. blairi.  See Brown (1973. Speciation in the Rana pipiens complex.  American Zoologist13:73-79) for details of recognition of species.

Frost et al. (2006, Bull. Am. Mus. Nat. Hist., 297: 369) removed blairi (and most other North, Central, and South American ranids) from Rana and placed it in Lithobates based on extensive DNA sequence data, but not all workers agree with this arrangement because of the instability this brings to well-known taxa such as Rana catesbeiana. AmphibiaWeb recommends using Rana (Lithobates) blairi to demonstrate that it is a member of the subgenus Lithobates while preserving long-standing taxonomy.