Description: Medium-sized (up to 90 cm TL), relatively stout-bodied brown or dark olive water snake. Belly yellow or off-white and boldly marked with two brown stripes down the center and another on each side of belly scales (dark stripes obscured in many older adults).

Habitat: In and along banks of relatively unpolluted, rocky woodland streams where crayfish are abundant.

Natural History: This mainly diurnal snake commonly basks in branches overhanging water, then retreats under rocks in the water, under cover on shore, and down burrows in banks and dams. It mates in late April or May and gives birth to 8-12 young from late July to September. Newborn are 18-20 cm TL. Diet consists almost entirely of soft, recently molted crayfish. Predators include other snakes, shore birds, and mammals. When captured, it seldom bites, but squirms violently and sprays feces and foul-smelling musk. 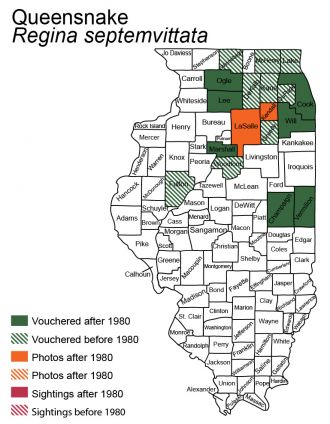 Status: Threats include water pollution that reduces crayfish populations and siltation of rocky stream bottoms. Uncommon in most of its range, but may be abundant locally in good habitat.

Type Specimen: Holotype not designated, but syntypes were at ANSP.