Similar Species: No other Illinois snake has a glossy black back and red on the sides and belly. See the Key to Illinois Snakes for help with identification.

Description: Large (up to 150 cm TL) glossy black snake with alternating red and black bars on lower sides and belly, and small eyes. Male has a more bulbous tail and an area of smaller, keeled scales on the back above the vent. 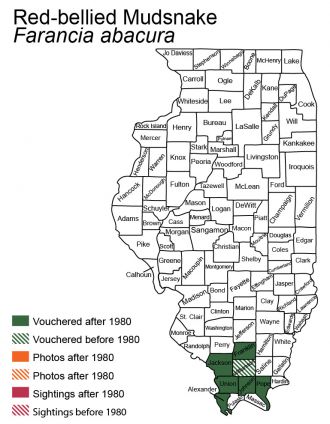 Natural History: Mating takes place in midsummer and eggs are laid a few weeks later. Clutches of 4-104 eggs hatch in August or September. Hatchlings 18-24 cm TL resemble adults in coloration. Diet of this nocturnal snake consists entirely of amphibians: salamanders and their larvae, tadpoles, and frogs. Large wading birds and medium-sized mammals are the main predators, especially of the young. This snake has the startling defensive behavior of pushing its hard tail tip against the hand of someone holding it. This apparently is the “hoop snake” of folklore.

Status: Listed as a Species in Greatest Need of Conservation in the Illinois Wildlife Action Plan. Seldom seen even where populations are thought to be secure.

Nomenclatural History: Was briefly transferred to the genus Hydrops, a name used by S. Garman. Also moved to several other genera, including Calopisma and Helicops. Junior synonyms include Farancia Drummondii Gray, 1842 and Farancia fasciata Gray, 1849.