Key Characters: Limbs absent; dark longitudinal stripes flank a noticeable groove on each side of the body.

Similar Species: May be distinguished from snakes by the presence of movable eyelids and external ear openings.  See Key to Illinois Lizards for help with identification.

Description: A long (up to 90 cm TL), slender lizard with yellow to brown back sporting six longitudinal stripes, including a distinct middorsal stripe. White flecks in the middle of the scales sometimes form light stripes.

Natural History: Known as the glass lizard because of the easily broken tail. Glass lizards eat invertebrates and small lizards. Mating occurs in May and 5 to 15 eggs are laid in late June or July. Hatchlings range from 10 to 13 cm TL. Hawks and carnivorous mammals are the main predators. 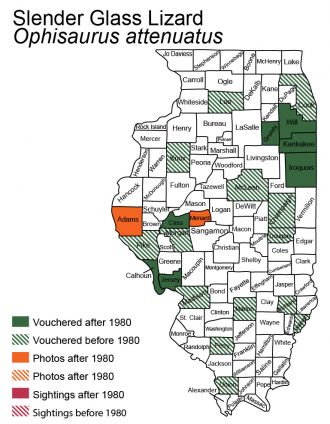 Status: The slender glass lizard is not listed as threatened in Illinois although it is seldom encountered. Listed as a Species in Greatest Need of Conservation in the Illinois Wildlife Action Plan.

Nomenclatural History: First named as a subspecies of O. ventralis, but recognized by Boulenger (1885. Cat. Lizards British Mus. Vol. 2) as a full species, even though Cope’s stance on the matter continued to influence many herpetologists until Neil (1949. Herpetologica 5(4):97-100) provided evidence that attenuatus was a full species.  Kennicott (1855. Cat. Animals Cook Co. IL. State Ag. Soc. Trans. 1853-1854, 1:577-95) referred to Illinois specimens of O. attenuatus as O. lineatus (Gray, 1838), a junior synonym for O. ventralis.