Description: Medium-sized (up to 22 cm CL) turtle. Carapace brown to olive, with black or dark brown knobs, and with dark blotches on posterior portion of each scute. In some individuals, blotches are encircled by yellow or orange lines; in others lines are present without blotches. Plastron yellowish and, in juveniles, patterned with dark swirls that cover up to half the plastral area. Plastral pattern obscure in old adults. Head, neck, limbs, and tail striped. Male with elongate foreclaws and vent behind end of carapace. 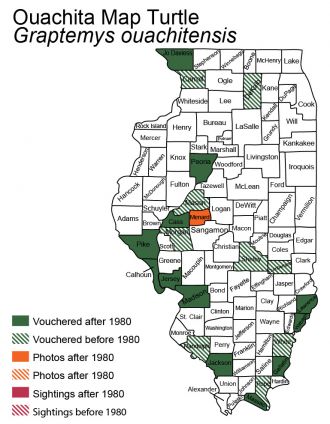 Status: Status and distribution poorly understood because of identification problems and confusion in literature. Locally common, particularly in Wabash River.

Original Description: Cagle, F.R. 1953. Two new subspecies of Graptemys pseudogeographica. Occasional Papers of the Museum of Zoology of the University of Michigan. 546:1-17