Key Characters: Two rows of yellow or orange-yellow spots down back from behind eye nearly to tail tip; belly slate gray or black, sometimes with small white flecks.

Similar Species: Tiger Salamander has a yellowish-black mottled venter, the toes are flattened in cross-section, and the eyes are gold. See Key to Illinois Salamanders for help with identification.

Description (modified from Smith, 1961): Stout salamander up to 19 cm TL with bright yellow spots on back and occasionally orange spots on head. Rarely without spots, but unspotted individuals still recognizable by robust build and plain belly. Adpressed limbs usually do not meet, except in juveniles, which have proportionally longer legs. Female 5%-7% longer TL than male but with proportionally shorter tail. Larva uniformly brown, never with dark blotches on back.

Natural History: Largely subterranean adults and juveniles are found in burrows, under or in large logs, and under large rocks, where they eat a variety of invertebrates including earthworms, snails, slugs, spiders, millipedes, and insects. They have been observed feeding at night at the mouths of burrows. Reproductive biology similar to Jefferson salamander except that A. maculatum females attach their eggs in dense gelatinous masses of up to 200 on edges of leaves, twigs, and other debris on pond bottom. The synchronous early spring migration of adults to breeding ponds is impressive. Predators of adults include skunks, raccoons, and snakes. 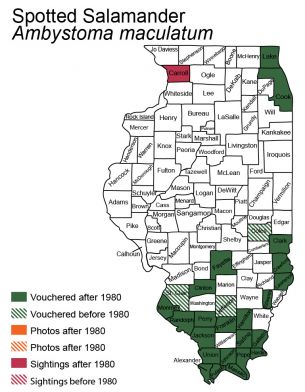 Distribution Notes: Southern and eastern populations are separated from those in the north by the Prairie Peninsula. Phil Smith (1961) doubted a UIMNH record from Urbana and did not plot it. I agree. The Carroll County record is from the private collection of H.J. Van Cleave.  Smith (1961) plotted it as a solid dot, indicating he had examined the specimen, but repeated attempts to find the species along the Mississippi River between St. Clair County and the Wisconsin border have not produced any specimens.  Because the nearest records to Carroll County are hundreds of km north and south, I reject this record.

Status: Although locally common in some areas, continuing forest fragmentation could isolate some populations from suitable breeding ponds.

Nomenclatural History: The Spotted salamander has a complicated nomenclatural history because two names pre-date Shaw’s Lacerta maculata, but those names were preoccupied — they were already given to other species. Those names were Lacerta punctata Linnaeus, 1766 (Syst. Nat., Ed. 12, 1: 370) and Salamandra palustris Bechstein, 1800 (In Lacépède Naturgesch. Amphib., 2: 544).  In addition, there is confusion surrounding whether the genus should be spelled Ambystoma or Amblystoma. See Stejneger (1907, Bull. U.S. Natl. Mus., 58: 24) for more on this situation. In the Illinois literature, the names Ambystoma punctatum and Ambystoma punctata have been used.